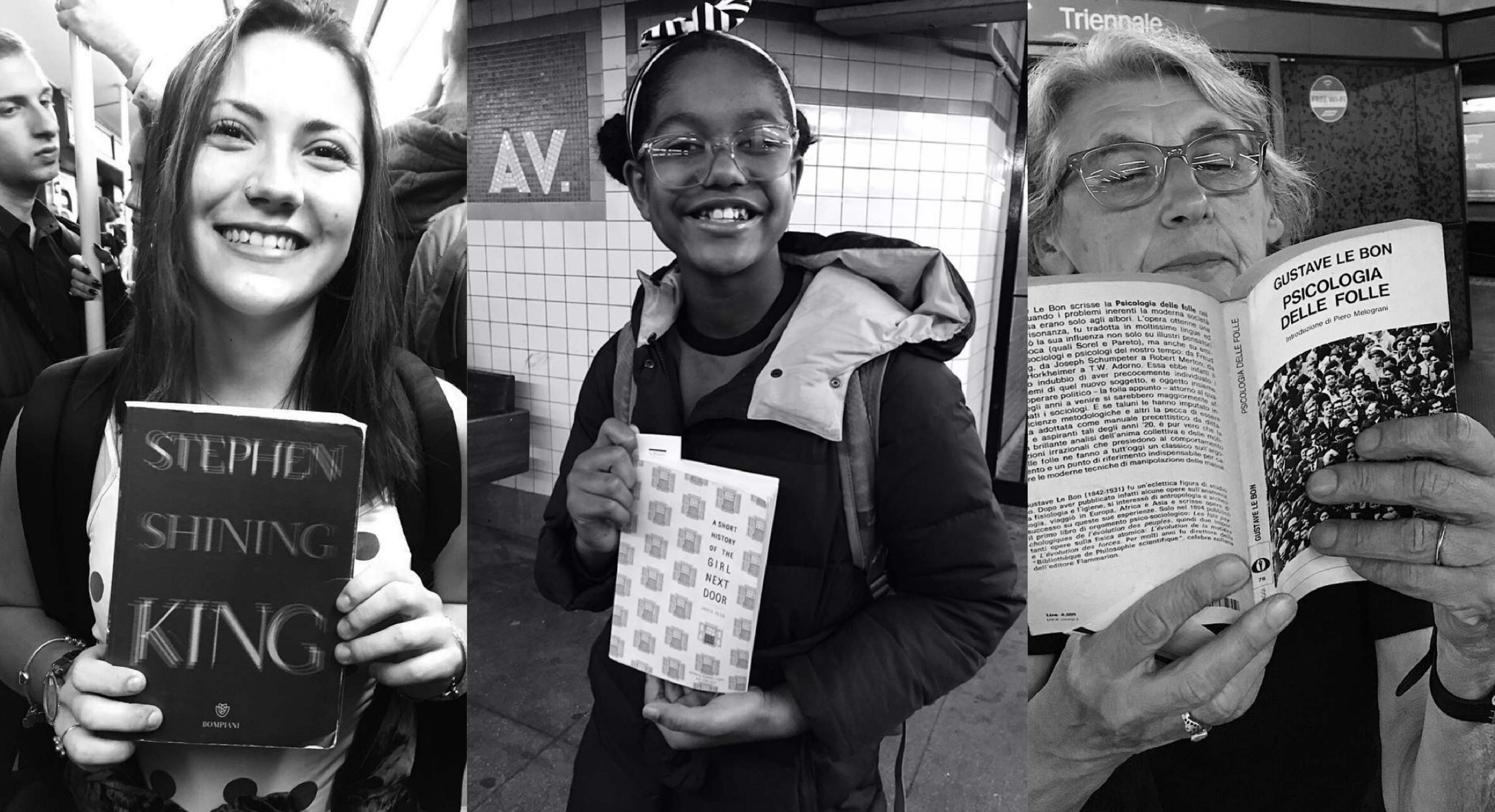 MILAN – If you’re a booklover and spend quite some time on Instagram, you’re probably already familiar with Subway Book Review. If you don’t, it’s easily explained: the founder, Uli Beutter Cohen, and her contributors talk to commuters during their subway ride, and ask them about the book they’re reading. Then, they post the interview and a picture on Instagram and tell the story of their encounter.

What is Subway Book Review?

Uli Beutter Cohen, founder of the project , moved to the US from Germany 18 years ago, and eventually to New York in 2013. She found herself in a new, unknown city full of possibilities. She was fascinated with the subway and the way peopled behaved there: silent, still, concentrated. She had the idea to start talking to them about the books they read, and capture the moment. This is how Subway Book Review was born. Five years later, their Instagram profile counts more than 100k followers and has contributors from many cities around the globe (DC, London, Barcelona, Mexico City, Sydney, Milan, and more).

NEW YORK — Nick: “The author has a buzz about her that I find really appealing. My daughters pointed out to me that I read a lot of male authors and I’m on a campaign to read contemporary women authors. They’re right. Most of my literary heroes are male writers and I need to broaden that. What else have my daughters taught me? They are very observant about the trappings of white male privilege and I hadn’t given it much thought. They’ve also taught me about the ethics of vegetarianism, the importance of chocolate chip cookies, and the challenges of being successful as a woman in your work. I think you can tell the difference between people who do and do not have daughters.” #AtmosphericDisturbances by #RivkaGalchen / @theubc for #subwaybookreview #newyork

What makes their book reviews so special is that they’re genuine, spontaneous and truly personal. You can see the human behind the book, and this is something not at all easy to find, especially on social media. We  interviewed Uli Beutter Cohen to ask her more about the project.

How did you come up with the idea of interviewing people about the books they’re reading?

When I moved to New York City, I started the project to connect with the city and the people who live here. New York is known as a destination for dreamers and people want to make “it” happen. For me, a book is an amazing way to get to know someone instantly because it’s a reflection of their mind and their identity at a specific moment in time. Being a book lover myself, I thought I could learn a thing or two about living in New York by talking to these readers. When I had the idea to capture and share the conversations I was having, the response was pretty great, so I didn’t stop and here we are, almost five years later.

Why do you choose the subway for your interviews?

I picked the subway because we behave differently on it: we have to stand still. In a gigantic metropolis like New York City, every day, millions of people are passing each other on the street. On the subway, we can actually see each other and who’s around us. That’s is why I’m looking for contributors in other cities with a metro or subway. The underground is a lifeline and a connector in more than the literal sense. To me, the subway is my church, my office, and my happy place.

Do you think Subway Book Review makes people curious about the books they see portrayed?

I think Subway Book Review makes people curious about books, other people’s lives, and stories in general. A book is a portal into another world and Subway Book Review magnifies that. We surprise our audience and give them a new story that they would never hear otherwise.

What makes Subway Book Review different from other book-related profiles?

We’re all about the reader. Seeing what today’s readers look like is very important to fight the stereotypical view that reading is for old, wealthy people with a big home library who are mostly white men. Reading is for everyone. I want to show that books let us all belong to the same world. Books make all of us powerful.

Do you think you’re making an impact in promoting books and culture on Instagram?

I get messages from all over the world, where people tell me that they have a new view on life after reading one of our interviews. That’s incredible— to have created something that gives people the chance to change their mind. There is nothing more exciting than that. Being on Instagram is easy, because it’s a global, visual platform that’s used by over 800 million people. It’s the best place to share stories at this moment in time and I’ll publish there until the next big thing comes along. You have to meet your audience where they already are—be that digitally or in real life.

Among the many cities where SBR is based, they are also an Italian city, Milan. The fashion capital’s inhabitants are widely known for being always busy, nevously running around the city. We also interviewed Elisa Torello, the SBR contributor from Milan, to ask her what is her experience with Milanese readers. Elisa is 22 years old and currently studies Literature at the University of Milan.

Why did you start contributing to Subway Book Review? Is it an enriching experience for you?

When I first discovered Subway Book Review I was very charmed by this project. I’m thrilled by the idea of seeing real people reading on the subway in New York City, and hearing why they are reading that specific book. I got in touch with Uli when my enthusiasm for SBR was starting to grow more and more every day, and I felt the urge to communicate this to her. It’s an honor for me to contribute to this project. Every time I meet a reader in the metro in Milan and talk to them, I am enriched in someway. I certainly have more books on my to-read list now, but the best thing about this is the bond that is established with people —when they start talking about topics and issues dear to them. I’d say it’s a human exchange, and a chance to meet the people of Milan.

Is it difficult to stop people running in the metro of Milan?

It depends. With time I’ve learned to understand what the best moments are to meet readers who are eager to talk. It’s always very exciting to approach someone with a book in their hands. Before I talk to someone, I’m always very aware that I’m about to break into a very particular and unique experience that the reader is having; I’m interrupting an alive relationship between them and the book. I’ve often received “no” as an answer, but there are a lot more people who want to have a real conversation. The majority of people are very enthusiastic to share their thoughts with someone.

In Italy young people tend to read less and less. Do you think Instagram is a good way to promote the passion for reading books or is it simply a trend?

Statistics say that young people read less and less, but on my metro rides I’ve been pleasantly surprised to notice that there are still many readers. This gives me so much hope. Instagram is one of the most popular social media platforms among young people in Italy, and its visual content makes it more immediate. It’s a very effective way to communicate, and I think using it as a way to encourage people to read is a successful choice. The secret lies in communicating the beauty and the truth that literature holds within and to show it all.

MILAN — Roberta: “I usually read a lot of books at the same time and pick what I want to read depending on how I feel. This morning I started this book because last night a dear friend of mine gave it to me. He read it many years ago and it really stayed with him. From what I’m reading in the introduction, the theme in this book is a very current topic: we as a society need to consider what we do and why we do it. I’m retired now but I was a teacher. What if I could teach one more day? I would certainly want to push young people to think that trying to fit in is okay but it’s important to always maintain critical thinking in everything they do. Young people can’t avoid conformity but they can decide with their intelligence what is right and what isn’t.” #TheCrowd #GustavLeBon / @itselis for #subwaybookreview #milan ??

MEXICO CITY — Alberto: “Call Me By Your Name is mostly a reminder of how fragile and vulnerable we are when we fall in love for the first time. It takes me back to those days when a simple, accidental touch or the smile of a strange boy could unleash an avalanche of feelings inside me — and how they would fight to come out. It took me years to really act on my feelings towards boys and I kind of envy the freedom the characters in the book have. I also love that Elio takes an almost dominant role, both in and out the bedroom. It shows us that love is a give-and-take that allows us to find ourselves in others”. @nolezama #LlámamePorTuNombre #CallMeByYourName by #AndréAciman / @kierkecaat_ for #subwaybookreview #mexicocity

WASHINGTON — Ellice: “I really needed to read this book. Didion worked at Vogue and my dream is to be the editor of a magazine, so I was already intrigued by her life, but her story is really helping me deal with my dad’s death. In one part, Didion is debating if she should throw away her husband’s shoes after he dies. We want to hold on to things but at the end of the day it’s ok that the physical is gone because the memories are still there. Her relationship is way more significant than a pair of shoes and the book isn’t just about how to process death, but also how to process change. The things that keep me closest to my dad are the memories we shared and even thinking about what he would like now. When Black Panther came out, the first thing I thought was that my dad would have loved this movie! I’m not trying to be cynical, but once you accept the fact that death is the one thing everyone deals with you are much more at peace.” @thellicellis #TheYearOfMagicalThinking by #JoanDidion / @badgalreading for #subwaybookreview #washingtondc ?

NEW YORK — Marin: “I’m on a challenge where I have to read 18 books in 6 months. I’m reading this book for the second time because it’s interesting and has a lot of twists. I’ll try not to give the end away. It’s about a boy who has a crush on a girl who is his neighbor and best friend. He sees her go through different relationships and moods but always feels kind of disconnected from her at the same time because he likes her so much. It’s interesting to watch someone else’s life. I don’t have any neighborhood crushes. We don’t really have kids in our neighborhood—we have two dogs as neighbors.“ #AShortHistoryoftheGirlNextDoor by #JaredReck / @theubc for #subwaybookreview #newyork ?